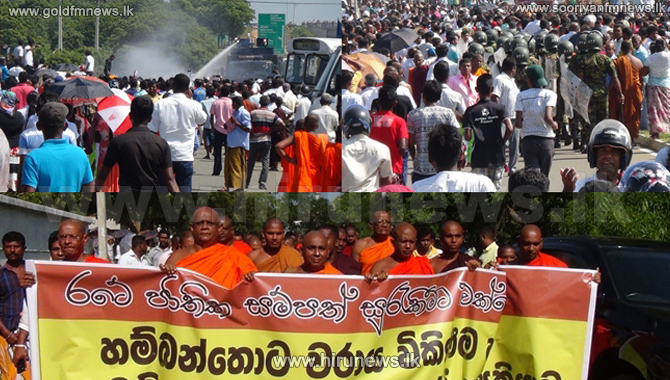 29 individuals who conducted themselves in an unruly manner during the recent protest in Hambantota were further remanded until January 30th.

The suspects were produced before Hambantota Magistrate Manjula Karunarathna today.

10 out of 34 suspects including a monk were released on bail when they were produced before the Magistrate.

The 10 suspects were released on extraordinary reasons and each suspect was asked to produce a surety bail of 500 thousand rupees. Rest of the suspects was further remanded.

Another 5 suspects who were arrested last night in connection with the same incident were also produced before Court today.


Hambantota Chief Magistrate ordered that the 24 protesters from Mirijjawila to be further remanded until January 30th.

They were arrested for violating a Court injunction to engage in the protest during the inaugural day of the China Sri Lanka Industrial Zone on January 7th.

At the same time, Hambantota Chief Magistrate Manjula Karunarathna ordered the release of another 10 protesters on a surety bail of 500,000 rupees each.

Meanwhile, an additional 4 suspects who engaged in protests disregarding the Court injunction at Mirijjawila were arrested last night.