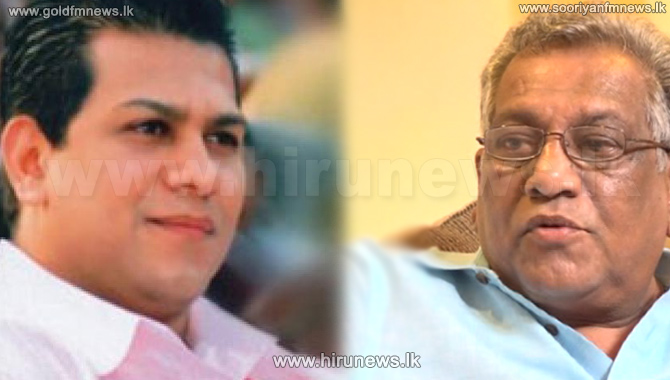 A newspaper belonging to a powerful UNP minister behind the conspiracy..

Former MP Duminda Silva’s father says that the news article published on today’s Dinamina newspaper stating that Duminda Silva and five others were planning to escape from prison is a political mudslinging campaign and a political conspiracy.

This lie is concocted by a newspaper owned by a powerful minister of the United National Party.

After this hoax news first appeared on the paper in November, newspapers of state-owned Lake House has started to report about it. This clearly shows that there is a political conspiracy as well as a media show.

This is not the first time such false reports were aimed at Duminda Silva.

Before it was reported that Duminda Silva was planning to escape to Singapore. Also, reports said that he will be taken to Singapore for medical treatment and that his birthday was celebrated inside the prison.

These were reported despite prison officials rejecting all allegations. The fourth false report was also weaved without any responsibility in the same manner.

It is very clear that a political conspiracy is behind these reports that are published in the newspaper owned by a powerful UNP minister, as the origins of such stories were not looked into and reported without proper analysis.

When such reports are put into the society, other media institutions also start to report them.

The intention behind the reports is to publicise them through media and affect the court proceedings.

I believe this conspiracy is a futile attempt carried out by projected media campaigns to put Duminda Silva into discomfort while trying to twist the minds of general public, prison officials and those belonging to the legal system.

Some people dash coconuts in front of the court as the case is taken up. They said that a top would even spin on sand.

When such false rumors were spreading, we didn’t make any statements not because we did not have answers to them but because of the trust and respect we have for the judicial system.

Duminda Silva is currently at the Prison Hospital. Two of the five inmates who are accused of escaping imprisonment with Duminda Silva are in Welikada Prison. The other three are in Kandy Prison.

So, how can they escape while staying in three different places?

This shows that the false reports are published for political gain and conspiracies.

These hoax reports are spread to mislead the public when an appeal was filed with regard to the incident.

Also, about two months ago media reported about a video that was recorded against the prison laws. This video was completely contrasting.

We have faith in the judiciary. So I say with responsibility that Duminda Silva has no reason to escape.

However, when we asked a higher official in prison if there is a possibility for five people detained in three prisons to escape, he asked us to pose the question to the media institution that reported about it..