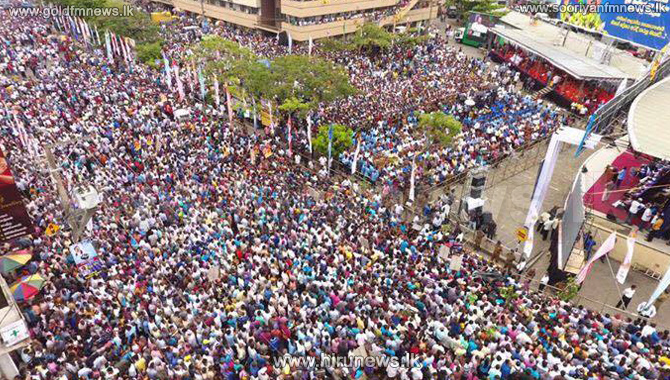 An agitation rally organized by the Joint Opposition titled “Peraliyaka Arambuma” is now being held at the Ananda Samarakoon open Theatre in Nugegoda.

The rally is being held against the proposed new constitution, cost of living, theft and corruption, delay of local government polls and selling off of public enterprises.

Members of parliament, provincial councils and former local government institution members who represent the Joint Opposition are participating in the rally.

Our correspondents state that several leaders of political parties and artistes are also present on the stage.

It has been observed that some participants had brought Croton and Jak leaves to the meeting premises.

Meanwhile, heavy traffic was reported in Nugegoda and in surrounding roads due to the ongoing rally.

Addressing the rally, MP Rohitha Abeygunawardana said it was the historic rally which heralds the downfall of the current government.