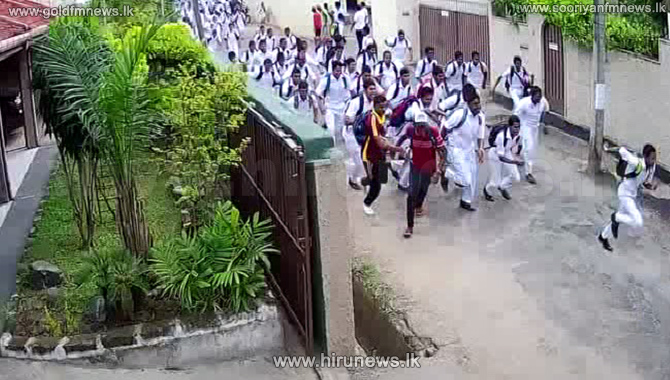 The ten students who were arrested after the Ananda/ Nalanda clash were released on bail following warning.

The decision was taken after the suspects were produced before Maligakanda Magistrate Court last night.

Magistrate also asked the students to appear in court with their parents or guardians.

Eight students were rushed to the Colombo National Hospital after the clash between two student groups from Ananda and Nalanda Colleges yesterday. The clash took place near Ananda College.

A hospital spokesperson said the students were released following treatment.

Meanwhile, a SLTB bus, private bus, two vans and a car were damaged during the incident.

It is also reported that five other students arrested by the Borella police will be produced before the Hultsdorf Magistrate’s Court today.

In a similar case, a clash broke out between two student groups of Nugegoda St. John’s College and Kothalawala College yesterday.

Six Kotalawala College students wounded in the clash have been admitted to the Lunawa Government Hospital.

Police Media spokesman’s office said this clash had occurred at the close of a softball match played at the Moratuwa Janajaya College stadium yesterday.

While 10 Nugegoda St. John’s College students have been arrested they are due to be produced before the Moratuwa Magistrate’s court today.