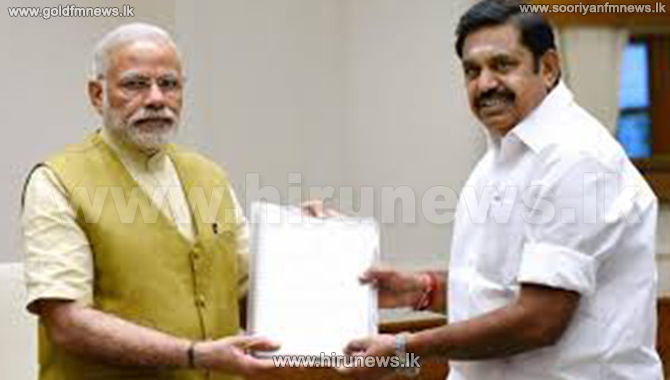 Palaniswami has noted the issues faced by Tamils in Sri Lanka in his memorandum, according to foreign media reports.

Palaniswami mentioned on the Sri Lankan Tamils issue that democratic decentralisation through the 13th amendment to the island Constitution should be the spring board for the self-determination rights of Tamils, through which the Lankan Tamils could eventually realise the aspiration of Tamil Eelam. Other demands included grant of dual citizenship for Lankan Tamil refugees living in Tamil Nadu, adoption of Tamil as an official language of the Union and use of Tamil in the high court of Madras.

Edappadi K Palaniswami was entrusted with the chief ministership by AIADMK chief V K Sasikala, after she was convicted in a case related to disproportionate assets.

He had managed to win the confidence motion in the state assembly earlier this month amidst chaos, thus ending a 10-day long political uncertainty. The constitutional crisis began after caretaker chief minister O Panneerselvam had revolted against Ms Sasikala.

Eventually Palaniswami received support of 122 MLAs of AIADMK and became the chief minister. Soon after, Prime Minister Modi in a telephonic conversation had congratulated him on taking over as chief minister of Tamil Nadu.