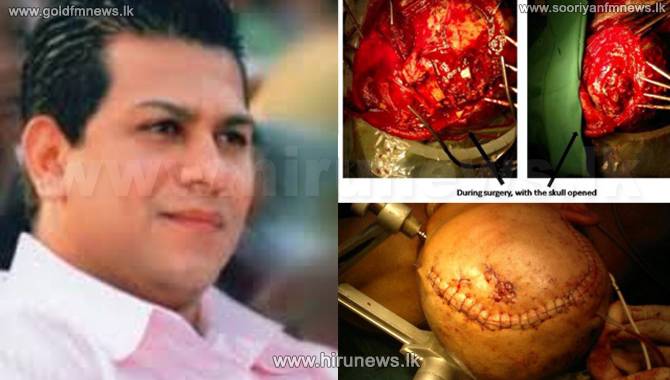 Bullet particles have penetrated to brain.

Dangerous health situation could develop due to stress and other complications.

Walking difficulty after getting up from seat was observed during medical inspection.

The specialist medical team which was appointed following a Court Order to inspect the health condition of former MP Duminda Silva has reconfirmed that the allegations made against the former MPs poor health are baseless and unfounded.

The particular medical report issued by the specialist doctor’s points out that Duminda Silva is in a condition to have regular medical treatment.

Following an order issued by the Colombo High Court, a team of 9 specialist doctors attached to the Colombo National Hospital have prepared this medical report on the health condition of former parliamentarian Duminda Silva.

The report, which carries the signature of Deputy Health Service Director General Dr. Anil Jasinghe, has been submitted to the Additional Judge of the Colombo High Court G.A.R. Artigala.

A CT Scan has been done on former MP Duminda Silva on February 23rd and, According to this medical report, his skull and brain have been severely damaged.

The report also states that there are bullet particles deposited in the frontal lobes and some metallic parts have pierced into his brain.

It also stated that there are swells in his brain as well.

The medical report further states that there are no change in the new CT Scan when compared to that of the CT Scan done in Singapore.

It stated that former MP Duminda Silva could experience various complications due to the damage he has received in his skull and brain.

At the same time, the medical report pointed out that there are risks, as such stress and other complications could fluctuate due to brain damage.

The specialist medical team also stated that Duminda Silva was supportive during the inspection and it has observed that the former MP Duminda Silva found it difficult to get up from a seat and walk.

In addition, the medical team has confirmed that Duminda Silva needs to use breathing apparatus further as he was recommended by his doctors in Singapore.

The report has stated that Duminda Silva has no issue in attending Court proceedings but there is a possibility to develop complications in him under stressful conditions.

Half of his skull was removed in surgery at the Sri Jayewardenepura hospital and two more surgeries were performed on him in Singapore.

According to the previous reports and the new report issued by the specialist team of doctors attached to the Colombo National Hospital have confirmed again that former MP Duminda Silva’s life is still at danger.

Under such circumstances, if somebody make allegations that former MP Duminda Silva has no severe health issues, such allegations should be treated as malicious and callous.

It is a universal right for any human being to seek treatment for any health issues.

Nobody has rights to deny treatment for such a patient.

The letter issued by Deputy Health Service Director General Dr. Anil Jasinghe with this regard.