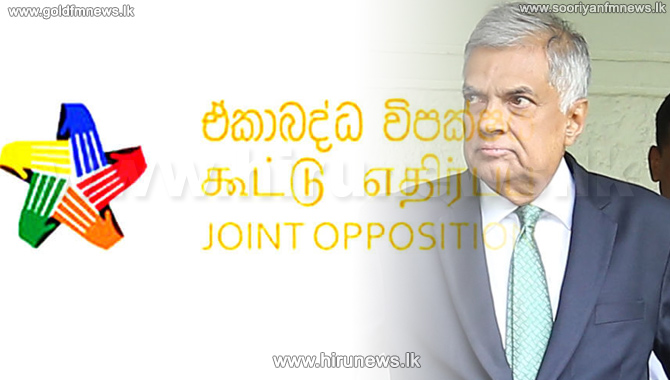 Joint Opposition's, UPFA MP Bandula Gunawardena says leaders of political parties of the Joint Opposition have unanimously decided to bring in a no-confidence motion against Prime Minister Ranil Wickremesinghe in connection with the Bond scam.

He added that the decision was made at a meeting attended by the JO leaders which was chaired by former President Mahinda Rajapaksa yesterday (Jan. 08).

The MP also said that leader of the Joint Opposition MP Dinesh Gunawardena sent a letter to the President, requesting a copy of the Bond Commission report for the reference of the opposition MPs.
Meanwhile, Acting Secretary General of Parliament, Neil Iddawela said that Speaker Karu Jayasuriya has summoned a special Parliamentary session at 10.30 am tomorrow (Jan. 10) at the request of Prime Minister Ranil Wickremesinghe.
According to the Secretary-General, the Speaker, in pursuance of Standing Order Number 14 of Parliament requests, all Members of Parliament to attend this special sitting.
Sources said that the recently released Central Bank Bond Commission report would be presented to Parliament during this session.