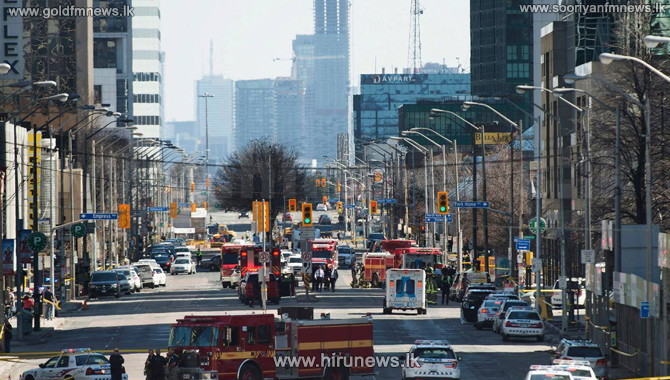 10 people have been killed and 15 injured after a man drove a van into pedestrians in Toronto, police said.

The suspect has been named by police as Alek Minassian, 25.

A man was arrested several streets away following a tense standoff with officers on the street.

Bystander videos appeared to show the driver pointing an object at the officers, who can be heard shouting at him to get down. The man was then detained without any shots being fired.

Toronto deputy police chief Peter Yuen asked for witnesses to come forward and said there would be "a long investigation". He said separate hotlines had been set up for victims' families and for witnesses.

City police chief Mark Saunders told a news conference that the incident appeared to be deliberate. He said Alek Minassian was not previously known to them.

Van rental company Ryder System Inc confirmed that one of its vehicles was involved and said it was co-operating with authorities.

About 18 miles away in the city center, foreign ministers of the G7 leading industrialized nations - Canada, the US, Britain, France, Germany, Italy, and Japan - were holding meetings.