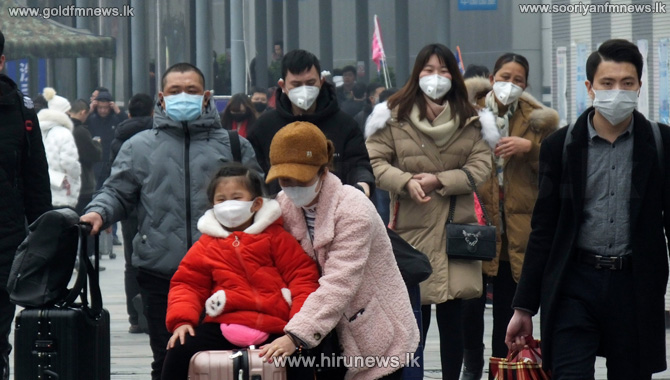 The US State Department has urged its citizens to refrain from visiting China, not only the state of Hubei, and the city of Wuhan, the epicenter of coronavirus.

This is the highest travel risks issued by the State Department.

The US increased the travel risk to China after the World Health Organization declared the coronavirus as a global health emergency.

Coronavirus transmission has been reported in the US for the first time.

A woman from the state of Illinois has transmitted the virus to her husband.

American medical personnel stated that he was a person who had never visited China but contracted the virus due to the close proximity to his wife who had the symptoms.

Indian media reports state that a special airplane is flying from New Delhi today to bring back the Indians trapped in Hubal Province in China.

The Boeing 747 is scheduled to arrive in Wuhan after a six-hour flight.

It is reported that about 325 Indians are trapped in the city of Wuhan, the epicenter of the coronavirus.

The Indian Authorities have stated that the crew on board the flight, which includes two doctors, will only take on board people who are not infected with the coronavirus.

Face masks, gloves and medications are also taken on board the flight, and there will be minimal contact between staff and passengers.

Food parcels and water bottles will be left on the seats.

The number of deaths due to coronavirus has risen to 213.

Three more coronavirus infected patients have been discovered in Singapore, and the total number of infected people have increased up to 13.

It is reported that 68,000 fake protective face masks with a fake manufactured date have been found in a drugstore in Hong Kong.

A pack of 50 face masks have been sold for about 6500 rupees in Sri Lankan currency.

With the spread of the coronavirus, there is a shortage of protective face masks. The National Health Commission of China stated that the total number of infected persons in the country was 9692.

It is an increase of over 1982 in comparison to the previous day.

The total number of infected people worldwide is estimated to be 9821.

The number of deaths due to coronavirus in China is 213.

Meanwhile, the Chinese government has decided to repatriate the residents of Hubei province, including the city of Wuhan, which is the epicenter of the corona virus infection.

According to the Ministry of Foreign Affairs of China, they will send hired aircrafts to bring them back to the country as soon as possible.

The Foreign Ministry spokeswoman stated that these measures have been taken considering the difficulties faced by the residents of Hubei state, especially Wuhan in other countries.

The hired aircrafts will be used since many foreign airlines are suspending and restricting flights to China with the rapid spread of the coronavirus.