It is the policy of the government not to sell any Sri Lankan resources to another country; says Prime Minister in India 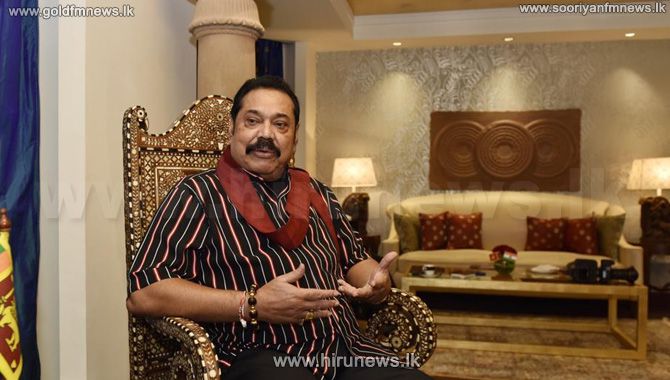 Prime Minister Mahinda Rajapakse says it is the policy of the government not to sell any Sri Lankan resources to another country.

The Premier stated this during an interview with the Hindu News paper.

Prime Minister Mahinda Rajapaksa who is currently in Indian has said that it would be great if India allows debt repayments by Colombo to be deferred for three years.

India’s THE HINDU newspaper reported that this was in order to help the country deal with its massive debt burden.

The issue was at the top of the agenda when Premier Rajapaksa met Prime Minister Narendra Modi in Delhi yesterday and discussed plans to utilise a 400 million Dollar Line of Credit extended by India.

Prime Minister Mahinda Rajapaksa said that if the Indian government takes this step, then other governments might agree to do the same thing, including China.

About 4.8 billion dollars need to be repaid this year.

Premier Rajapaksa said he had also requested further financing from India for his government’s nationwide housing project, and discussed other Indian investments planned, including an LNG port, and a joint Indo-Japanese bid for building an oil terminal in Colombo’s Eastern port.

However, he made it clear that his government would not carry forward the oil projects in the eastern Trincomalee port that had been agreed to in an MoU signed by his predecessor Ranil Wickremsinghe in April 2017, or an Indian government plan to develop Mattala airport in the south.

Prime Minister Mahinda Rajapaksa who said that Sri Lanka respected India’s decisions with regard to India’s internal matters also said that India was a relative while other nations were friends.