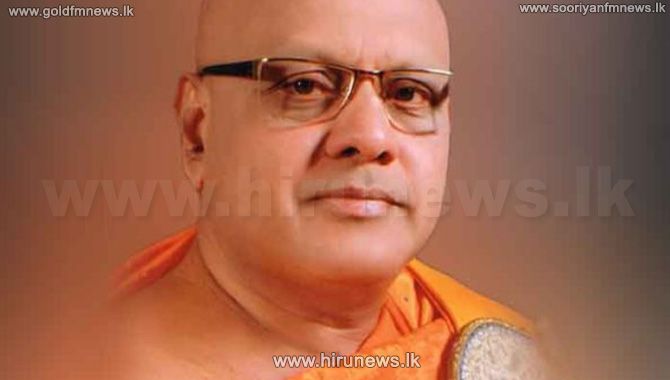 It was decided by the Government of Burma to award the Anunayake of the Kotte Sri Kalyani Samagreedhamma Maha Sanga Sabha and Main Secretary, Professor at the Peradeniya University Pali and Buddhist Studies Division Most Venerable Kotapitiye Rahula thero the highest honorary degree ‘Aggamahapanditha’ awarded to Bhikkus.

The President of that country had announced this at the Independence Day Celebrations held recently in Burma. The Sri Lanka Burma Ambassador had met Venerable Kotapitiye Rahula thero and invited him personally and on an official basis to visit Burma to accept this honour.

It has been decided to award this degree in appreciation of the educational services rendered by this Bhikku on behalf of the development of the Sasana. It is reported that this is the youngest Bhikku to be awarded this honour within a more than 100 year old history.

The study of the creation ‘Saddasaraththajalini’ book, the Pali Grammar tome written in Burma carried out by Venerable Kotapitiye Rahula Thero on behalf of his Doctorate and especially the excellent service rendered by the Thero as the former Director of the Kelaniya University, Pali and Buddhist Studies Post Graduate Degree institution to thousands of Burmese Bhikkus on behalf of their Post Graduate Degree studies, have been taken into consideration in granting this honour.

The royal function where the President of Myanmar will present the award is scheduled to be held next March in the present Capital of Myanmar.

Several years ago, Bangladesh, in appreciation of the service rendered by this Bhikku on behalf of inter-religious co-existence awarded the ‘Atheesha Sankar’ golden award and the Sri Lanka Pracheena Bhashopakara Company awarded the honorary degree of ‘Rajakeeya Panditha’ to the Venerable Kotapitiye Rahula Thero.