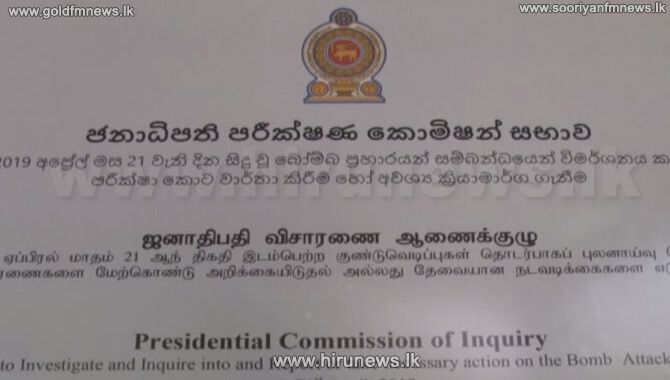 The brother of the father of the two main suspects in vandalizing Buddha Statues in Mawanella, Rasheed Achjul Akbar, gave evidence in the presence of the Presidential Commission of Inquiry, inquiring into the Easter Sunday terrorist attacks.

He has been the Chairman of the Jamathe Islamiya organization for 24 years and he had quit his post only two years ago.

Giving evidence to the Commission he said that, although the Shariya Law was not a law in Sri Lanka this law is being taught in Arabic schools.

He also said that Moulavis who obtained education from these Arabic schools, teach various things they prefer to at Madrasa schools.

When the Commission inquired how the Jamathe Islamiya organization received finances, he said that funds are received through Non-Governmental Organizations in the United States of America, Canada and Kuwait etc.

When he was questioned whether these finances were received in a legal manner, replying Rasheed Akbar said that money was received by them through a Bank.

The Commission also asked the witness whether he had sent Saadik the son of his brother Rasheed Mohammed Ibrahim to Turkey for training through the Jamathe Islamiya Student organization. In reply, he said that it was possible to get to know through an inquiry made from the Student organization that in January of 2014, Saadik Abdullah left for a three-month training in Turkey and returned to the country subsequent to four months.

Replying to questioning by the Commission, as to the reasons why Saadik Abdullah was removed from this organization, the witness said that if incidents such as that which took place in Aluthgama were to occur again Saadik would not have tolerated them and his opinion was that the organization should attack them in order to protect the Muslim people.

The Commission then inquired whether this incident was informed to institutions connected with the law. Replying, the witness said that he informed Intelligence Divisions. The secret document related to this notification was also handed over to the Commission by the witness.