THE RACKETEER WHO SOLD DRUG TABLETS TO SCHOOL CHILDREN, ARRESTED 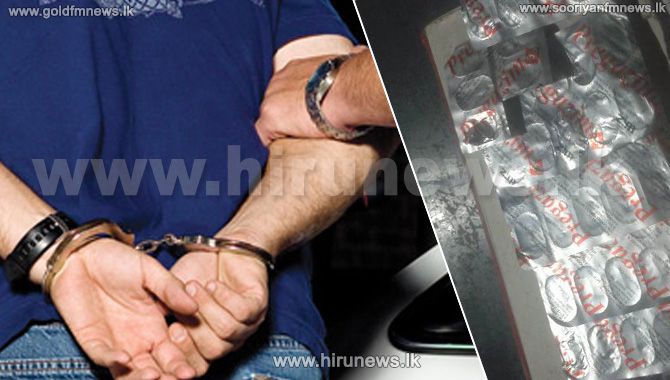 The Sooriyawewa Police Special Task Force has taken into custody at Wewegama in Sooriyawewa last night (13) an individual who sold drug tablets to young people.

It is a 24 year old youth engaged in cultivating a chena in Wewegama, Sooriyawewa who was taken into custody thus.

This suspect was arrested by the Sooriyawewa Police STF based on a tip-off given by a resident of the area.

The Police STF officers took into their custody 58 tablets containing drugs which the suspect had in his possession at the time of his arrest and were being taken to be sold. These tablets are sold by pharmacies only on medical recommendations and it has been revealed that they are used only for patients with severe pain such as nerve pain.

The suspect had bought these tablets from a pharmacy known to him at the rate of Rs. 55 per tablet and sold them at prices between Rs. 100 and 150 to school children and youth of the Sooriyawewa area. This was revealed during initial investigations carried out.

The suspect taken into custody has been handed over to the Sooriyawewa Police for further investigation and is due to be produced before the Hambantota Magistrate’s Court.