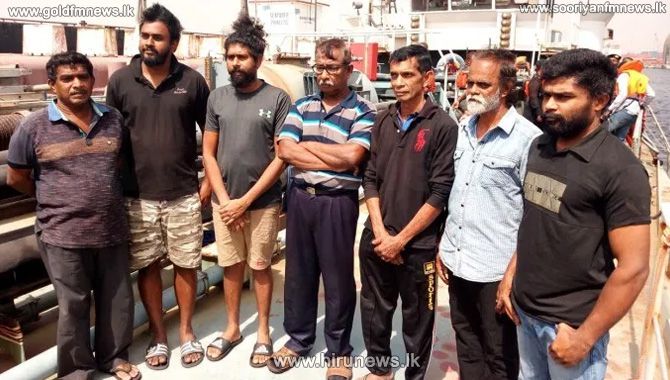 7 Sri Lankan Sailors and few other crew members who were arrested by the Nigerian Navy have been handed over to their Financial Crimes Commission.

66 individuals including 7 Sri Lankans were arrested by the Nigerian navy in December over alleged illegal bunkering and were handed over to the Nigerian Economics and Financial Crimes Commission.

While the captain of the ship is a Sri Lankan national, Nigerian media reported that 57 Nigerian nationals and 2 Gana national are among the arrested.

Speaking to us the crew revealed that on the 12th of December last year, 47 days after leaving Morocco, the ship received crude oil from a Nigerian ship under the orders of the Montinoro Company.

Thereafter the ship was confiscated by the Nigerian navy on the 13th of December while they were travelling towards Ghana.

However Nigerian officials have stated that the ship contained 838 metric tonnes of crude oil which were acquired without permission.

The group requests Sri Lankan officials to interfere for their release as they may get convicted for a crime they have not committed.