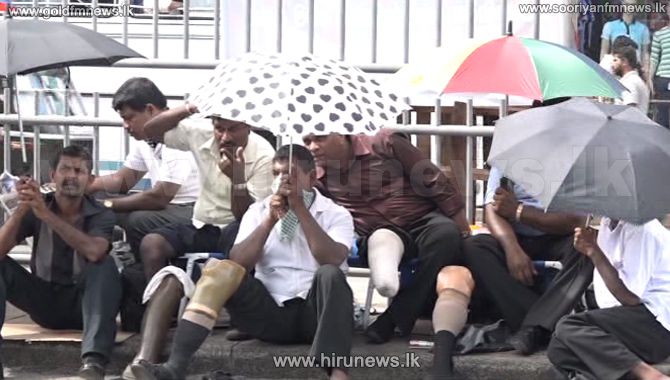 The national force for protecting the war heroes has launched a satyagraha in front of the Colombo Fort Railway Station.

That is to demand for the full lifelong salary for the retired disabled war heroes and the wives of deceased war heroes.

Yesterday morning retired disabled war heroes and their wives walked from Fort Railway Station up to the presidential secretariat and staged a protest in front of it.

Subsequently six members of the national force for protecting the war heroes were invited to the president’s secretariat for a discussion.

On this occasion the protesters were taken to the army headquarters without giving them an opportunity for a discussion.

However secretary of the national force for protecting the war heroes Ujita Roshan told our news team that they would be engaged in the satyagraha till their demand is approved by cabinet and an assurance in writing is given to the effect that  it would be implemented.