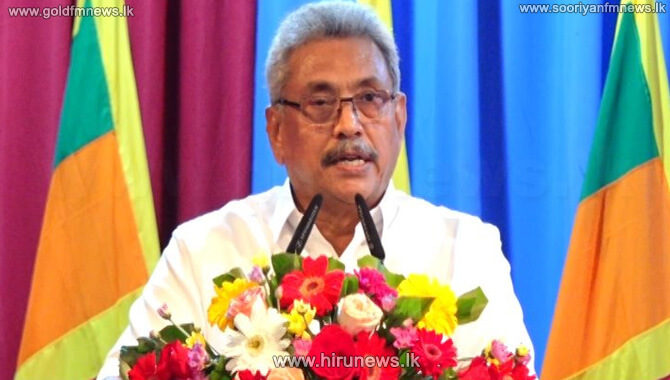 President Gotabhaya Rajapaksa states that the aim is to create a people centric economy and eradicate poverty.

The President was addressing the National Convention of the All Ceylon Samurdhi Development and Agricultural Research Production Assistant Officers Association.

The government's objective is to raise the income level so that the people belonging to each layer of society can live comfortably.

The President said that the government has planned to provide employment opportunities to 100,000 members from low income families and will need the assistance of Samurdhi Development and Agricultural Research officers for this endeavour.

It is the responsibility of public officials to participate in this effort to make life easier for the people.

President Gotabhaya Rajapaksa also requested public servants to directly link their knowledge to governance by making practical proposals that would improve the quality of life of the people and the economy of the country.

The President pointed out that it is a problem to not have a second generation for agriculture.

He said that the people are strangled with various laws and regulations and it was the duty of public servants to make life easier for people by relaxing such laws.

The President also said that the mistakes or oversights of the past government will not be used as an excuse by the present government.

President Gotabhaya Rajapaksa further stated that the government is ready to overcome all the challenges that the country has to face due to the short-sighted governance of the previous regime and will therefore, require the strength and might of the state services for this task.