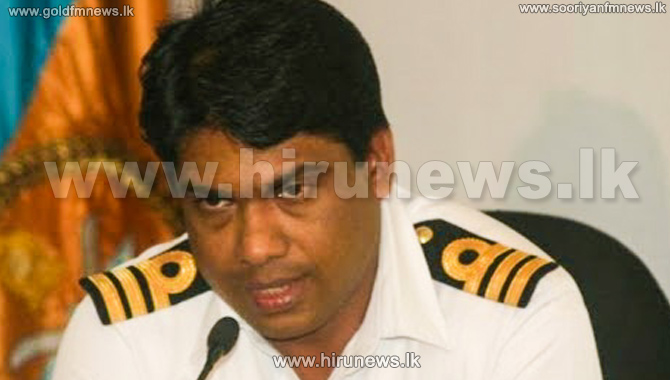 Former Navy Media Spokesman Rear Admiral D. K. P. Dassanayake says that if he had not been recalled to this country while he was studying for a post graduate degree on Policies and Strategies on preventing Terrorism, based on political revenge by the previous government of good governance, it would have been possible to prevent the series of attacks that took place on Easter Sunday.

This was stated while providing evidence to the Presidential Commission on victims of political revenge.

Rear Admiral D. K. P. Dassanayake has been named as a suspect in investigations being carried out into the abduction of 11 youth in Colombo. He was summoned to the Presidential Commission to obtain evidence based on a complaint he had lodged regarding political revenge during the tenure of the government of good governance.

Commencing giving evidence, he said that with Islamist extremism arising across the world, America had given a chance for one representative from each country to follow a course and obtain a degree from September 2014, a post graduate degree on Policies and Strategies on preventing Terrorism and he had been given this opportunity from Sri Lanka.

Anyhow, subsequent to the government being overturned in several months, he pointed out that the previous government recalled him.

This witness told the Commission that he was informed by the former Navy Commander that after giving a statement he could return to continue with the studies for the degree and that he had been summoned on the instructions of former Prime Minister Ranil Wickremesinghe based on a decision made by the Security Council.

Rear Admiral D. K. P. Dassanayake said that according to these summons he had obtained a period of 14 days study leave and arrived in the country on 16 February 2015. He further said that he had met former Navy Commander Vice Admiral Jayantha Perera and he was instructed to give a statement on 19 February 2015 to Officer-In-Charge of the Collective Theft Investigating Division Nishantha De Silva of the Criminal Investigation Department.

He said in the presence of the Commission that on this particular morning, Commodore Sudharshana who was the Navy Commander’s Assistant Naval Officer, had told him not to go to the CID. However, Nishantha De Silva had submitted facts to the Fort Magistrate’s Court and imposed a ban on foreign travel, the witness said. He pointed out further that this ban on travel abroad was obtained by deliberately misleading Court.

On this occasion the lawyer representing the witness asked D. K. P. Dassanayake whether a powerful minister of the government of good governance had made some sort of an inquiry into his going abroad.

The witness said during this instance that the then foreign minister Mangala Samaraweera had asked for a special report from the Navy Commander, about his travelling abroad. Expressing his views further, the witness said, he was the only person who was granted the opportunity to follow the post graduate degree on Policies and Strategies on preventing Terrorism and the government made sure he was not given a chance to complete it and also that he was deprived of the opportunity to work with special responsibility in order to prevent the Easter Sunday attacks.

Giving evidence further, in the presence of the Commission, D. K. P. Dassanayake said that based on the allegation above he was taken into custody and even though it is now 5 years since that happened, Nishantha De Silva had not reported any fact to the Court in relation to this case through a B report.