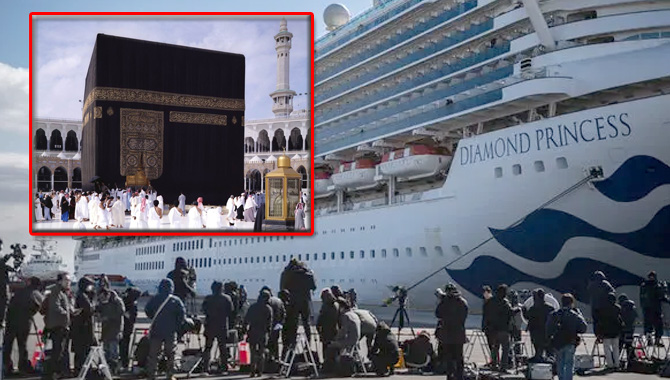 The door to pilgramages to Mecca has been closed and India has rescued the two Sri Lankans who were on board the Diamond Princess ship.

The two Sri Lankan staff members who were on the Diamond Princess ship from where more than 700 persons infected with the Corona Virus were found have been brought to New Delhi in India this morning.

The Ministry of Foreign Relations said that they will return to Sri Lanka subsequent to a period of quarantine.

There were approximately 3711 passengers on this ship which was anchored at the Yokohama Port in Japan and it has been confirmed that more than 700 persons contracted the virus, as of now.

The 119 Indian nationals and foreigners from 5 countries were brought to New Delhi today in a special aircraft belonging to India.

Among the group that arrived in New Delhi, apart from the two Sri Lankans there were nationals from Nepal, South Africa and Peru.

Meanwhile, Saudi Arabia has decided to ban foreigners who come on pilgrimages to Mecca, Medina and other religious places, from entering the country.

No person infected with the Corona virus has as yet been reported from that country, and it is of significance that Saudi Arabia has made this decision within that context.

From last December, infected persons were found in 40 countries and as of now this figure has risen to 80,000.

The World Health Organization said that the virus is spreading more rapidly outside of China rather than inside that country.

433 new patients were discovered in China yesterday and 29 patients died.

Accordingly, the number of infections in China stands at 78,497 and 2744 deaths have been reported.

The Microsoft Organization said that due to the spread of the Corona Virus in China, sales of their computers have been badly affected.

With 334 new Corona virus infected persons being found in South Korea the number affected by the virus has increased to 1595. There were 13 deaths reported too.

With confirmation that a group of South Korean troops and an American soldier being infected with this Virus the army exercises that were to have been carried out between the two countries have been postponed.

American President Donald Trump said that he has assigned the responsibility of taking action to face the virus, to Vice President Mike Pence.

Corona virus infected individuals were reported from Austria, Croatia, Greece, Norway and Switzerland for the first time this week.

The number of persons infected with the Corona Virus in Iran is 139 and 19 deaths have been reported.

Outside of China the most number of deaths have been reported from Iran. Australian Prime Minister Scott Morrison said today that the ban on people arriving in the country from China will be extended for another week.