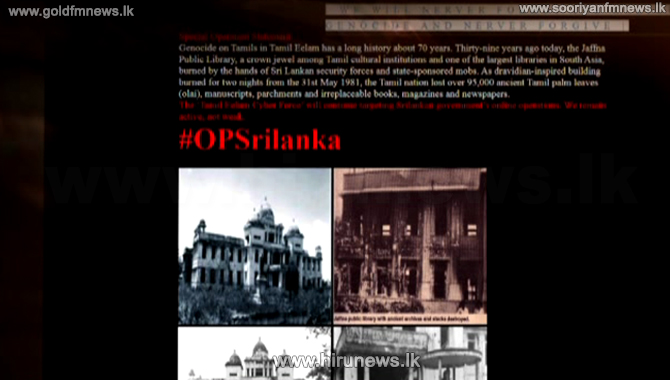 hirunews.lk website was subjected to a cyber-attack recently by a group named Tamil Eelam Cyber Arm on the 18th and today another pro LTTE group had targeted two state websites.

The Websites of Sri Lanka Foreign Employment Bureau and Ministry of Public Administration had been subjected to a Cyber-attack.

When we logged in to the website of the Foreign Employment Bureau this morning to obtain details regarding the repatriation of migrant workers, it was seen that the website had been defaced using LTTE propaganda.

A version of a Tamil song was played in the background, with the LTTE's flag with the tiger mark on it. A group called the Tamil Eelam Cyber ​​Force had written a note below.

It included a series of photographs of the Eelam War in Sri Lanka, including a photograph of the Jaffna Library, which was burned down 39 years ago on May 31, 1981.

Meanwhile, the official website of the Ministry of Public Administration was also attacked this morning. Ministry secretary J J Ratnasiri, said that the website has been restored.

A similar cyber-attack was launched on the 18th of this month by the pro-LTTE Tamil Eelam Cyber ​​Arm, to the leading news website in the country, hirunews.lk

The Maha Sangha as well as the people's representatives point out that this is a good example of pro-LTTE forces still operating after 11 years of the brutal terrorism that prevailed in the country for 30 years.

In the meantime, Prof. Asanga Abeygunasekera, Founder Director General of the National Security Research Institute states that although Sri Lanka was able to successfully defeat the LTTE militarily, there is a great need to defeat them ideologically.