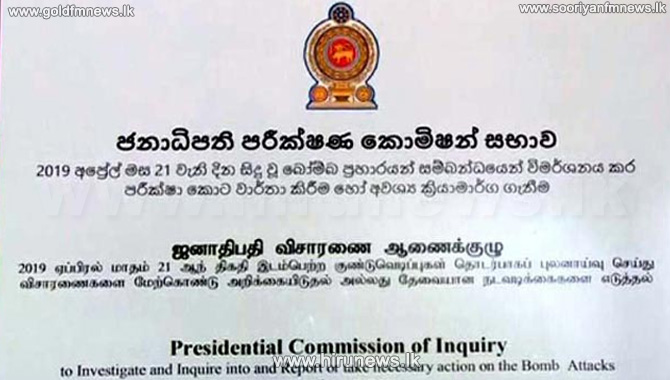 It was revealed at the Presidential Commission appointed to probe the Easter Sunday Attack that weapons distributed by Former Governor of the Eastern Province M.L.M Hizbullah had reached Zaharan Hashim.

This was when a journalist who interviewed Zaharan Hashim in 2009, gave evidence before the commission.

In August 2009, he had an interview with the leader of the National Thowheed Jamaat Organization, Zharan Hashim. The witness responded to a question by the Presidential Commission in the following manner.

“After a clash between two mosques in Beruwala in July 2009, I went to Katthankudi. There I was made to understand that there were clashes between Zaharan’s group and the traditional Muslims on several occasions. I received his telephone number from a person in Katthankudi area and went to his office in the area to meet him. I saw several T-56 rifles in the office”

"When I inquired about the weapons from a person, I was told that this could be the weapons distributed to the Muslims of Kattankudy area by former governor M.L.M. Hizbullah".

When the Commission inquired as to when the firearms had been supplied, he said that it was revealed that they had been distributed to Muslims through Hizbullah after the LTTE attack on a mosque in Kathtankudy in 1993.

He further stated that the distribution of arms had taken place during the tenure of former President Ranasinghe Premadasa.