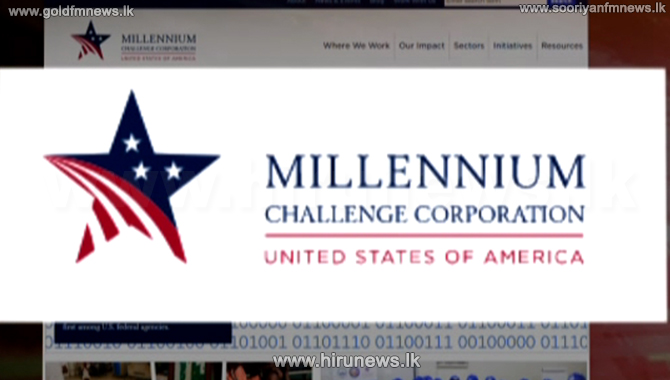 The final report by the Expert’s Committee appointed to review the proposed Millennium Challenge Corporation Compact (MCC) is accessible for general public in the following websites.

The Committee was chaired by Lalithasiri Gunaruwan, a Professor of Economics at University of Colombo. Former Secretary to the Ministry of Transport Dr. D. S. Jayaweera, President’s Counsel Justice Nihal Jayawardena and architect Nalaka Jayaweera were the other members of the Expert’s committee.

The final report of the Committee was handed over to President Gotabaya Rajapaksa by Prof. Lalithasiri Gunaruwan at the Presidential Secretariat on the 25th June.

President Rajapaksa directed the Secretary to the President to place the recommendations of the report before the public.

The committee report further points out that the majority of MCC-funded countries have so far failed to achieve the objectives set forth in the MCC's main objective.

The MCC was proposed to be signed with the US Millennium Challenge Corporation. We reported yesterday in our news story about some of the matters mentioned in the review report on the MCC agreement.

The committee specifically stated that if the MCC proposal is implemented, Sri Lanka could become part of the US war strategy by entering into agreements such as Sofa and Aqsa.

The report further states that the then Secretary of the Ministry of Finance Dr. R H S Samaratunga who was the leader of the Sri Lankan delegation at the negotiating convention held in the US from 1st to 5th October 2018 and by then he has stated that all the decisions of the project had been finalized.

The committee report states that the majority of MCC-funded countries have so far not been able to achieve the objectives set out in the MCC's main objective.

Dr. Emma Maudsley of Cambridge University has told the committee that the MCC deal does not end poverty but pave the way for American companies to plunder poor countries.

The committee report quotes Professor Philip McMichel of Cornell University who has stated that the MCC agreement first creates a situation where the government changes land laws and creates conditions for land acquisition.

According to Professor Susan Soderbergh of the Queen's University of Canada, the MCC Treaty is a new form of American imperialism.

Nepal has signed a MCC agreement, but has so far failed to pass it as a parliamentary act, due to debate within the Nepalese ruling party over the possibility that the MCC could contribute to the geopolitical risk of the Indo-Pacific war strategy.

Recent comments by the Philippine President imply that the Philippines is not pleased with the second MCC agreement signed in 2016.

The committee report further states that the current international experience on the MCC agreement is neither satisfactory nor beneficial.

Therefore, it is important for Sri Lanka to draw the lessons from these experiences before considering the MCC Agreement.

This report indicates that if the MCC Agreement with its provisions is adopted by Sri Lanka as a Parliamentary Act, these provisions will become law in Sri Lanka and therefore the social, cultural, political and legal confusion that may arise in the country cannot be ignored.

The report states that Sri Lanka should not fail to take into consideration the fact that if the main resolution of the MCC was signed, Sri Lanka would automatically be included in the US geopolitical map of the Indian Ocean region, the geopolitical environment and the strategic location of Sri Lanka would be important to the competitors in an international power struggle.

The committee points out that although these factors may not be construed as a potential risk when considered separately, they can pose a threat to national security and national sovereignty, when considered together.

In the meantime, the US embassy in Colombo says that no money has been given to the Sri Lankan government under this agreement.

Leaving a note on their Twitter account, they said the donations were postponed indefinitely until a final decision was reached on the deal.

However, an article by a team of Millennium Challenge Corporation officials on a visit to Sri Lanka published on the US Embassy website in Colombo on June 13, 2018 states that In July 2017, a sum of $ 7.4 million had been awarded to the Government of Sri Lanka.