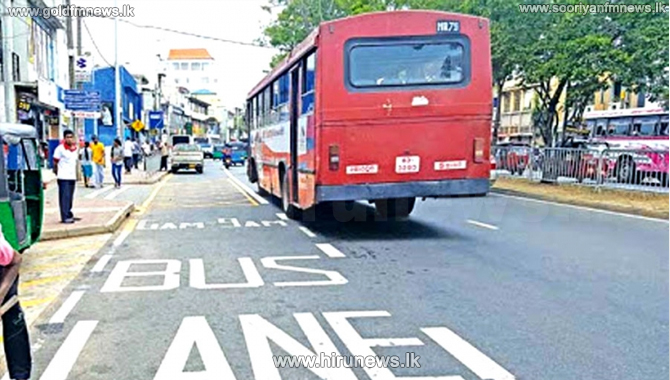 The third phase of the Colombo City Bus priority lanes and Traffic lane Law will be implemented from today (29).

The Police Media Unit stated that the Bus priority lanes and Traffic lane Law will be enforced from Ingurukade junction to Sirimavo Bandaranaike Mawatha to Armor Street, Maligawatta and via Maradana to Colombo Fort at 6.00 am.

When the bus priority lane law is in place, only private and CTB buses as well as buses and vans with over 20 seats transporting school children and office staff.

Meanwhile, the law on bus priority lanes running from Moratuwa to Olcott Mawatha in Pettah is being strictly enforced.

Accordingly, the bus priority lanes will be operating when entering Colombo from Moratuwa ‘Kurusa’ Junction to Mount Lavinia Junction, Colpetty via Wellawatte and to Pettah Junction via Colpetty and Pittala Junction.

Similarly, when leaving Colombo between 4.00 pm to 7.00 pm, the bus priority lane should be followed from Pettah, Slave Island, Pittala Junction, Library Roundabout to Colpetty.

Similarly, when leaving Colombo between 5.00 pm to 8.00 pm, the bus priority lane will be in force from Mount Lavinia Maliban Junction to Moratuwa ‘Kurusa” Junction.