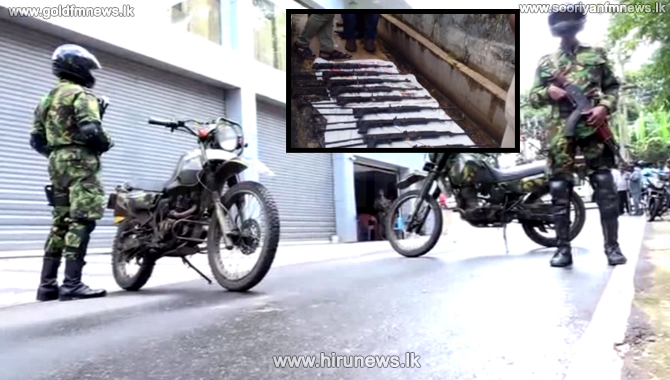 The Police Special Task Force (STF) has been able to apprehend the largest quantity of firearms found in Sri Lanka belonging to the underworld.

This was while it was hidden in a four-storey shop in Pitipana, Homagama.

These are believed to be the weapons of Tharaka Perera Wijesekara alias Kosgoda Tharaka, an underworld leader currently detained in the Boosa Prison.

Based on information received from Pottu Kapila alias Madapathage Kapila Kumara who was arrested by the STF in Ingammaruwa area in Meegoda recently, the STF recovered 12, T-56 weapons and a T-81 weapon.

On June 22, 2018, a jewellery shop in Matara town was robbed by a group including Kosgoda Tharaka using a van and 3 three-wheelers.

It was later revealed that the van had been driven by a man named ‘Potta Kapila’.

The STF suspects that the firearms were brought to the shop by Potta kapila last May.

However, the shop owner stated that the firearms were hidden inside the shop as he was threatened with death.

However, a senior police officer who is investigating the incident said that the firearms had been handed over to Pottakapila by Gagana one of the close associates of Kosgoda Tharaka, who is currently in prison as he did not have aces to a phone.

The STF is conducting further investigations to determine the reason for hiding these firearms and where they were brought from.