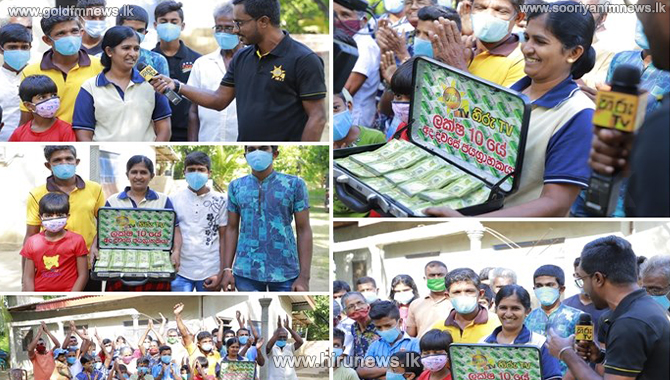 To coincide with its 22nd anniversary, Hiru is now offering the largest cash prize in television history.

Every day, a loyal viewer has the opportunity to win Rs. one million, with a total of Rs. 22 million on offer over a period of 22 days.

Yesterday’s (03) lucky millionaire, the third so far, was Thushara Kumari of Aralaganwila.

Viewers can participate by first marking the correct answer to each of the questions that would be asked during the Hiru Tele Perahera between 7.30 pm and 9.55 pm – which features ‘Mahaviru Pandu’, ‘Gemunu Maharaja’, ‘Ahas Maliga’ and ‘Adarai Man Adarai’.

After the question is asked during ‘Adarai Man Adarai’, all answers should be mentioned in order and messaged to 7766 (HTP space answers in order space name, national identity card number and area).

The day’s winner will be announced during ‘Sihinayaka Seya’ teledrama.