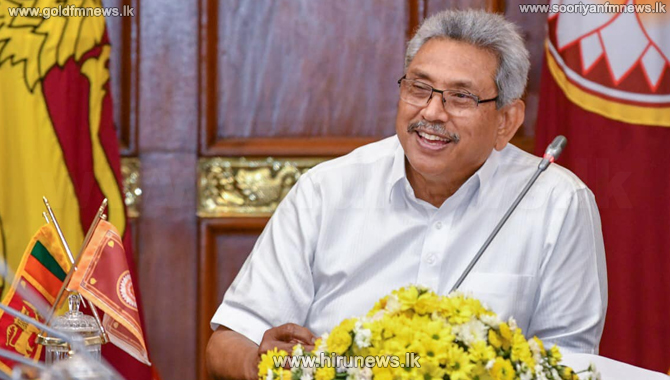 President Gotabaya Rajapaksa emphasized that it is an imperative of the era to establish a sports culture in order to form a healthy, disciplined and an athletic society in the country.

Sport is the youth’s language. President noted that directing a child simultaneously towards both education and sports will raise a balanced individual for society.

President stated that Ministries of Education, Youth Affairs and Sports have a massive responsibility to bear in this regard.

President Rajapaksa made these comments during a discussion to review the future activities of the State Ministry of Rural and School Sports Infrastructure Promotion at the Presidential Secretariat today(September 16).

President stressed the requirement of a program to hone the skills of the students who show talents in sports across the island by providing them proper nutritious food and access to international level training from a young age.

President highlighted that despite the construction of school playgrounds following requests by the people, it was evident on multiple occasions that they had not been maintained accordingly. President added that simple maintenance tasks such as cutting grass are cheap and bearable.

President advised the officials to establish a separate unit to maintain school playgrounds at district level.

Minister of Youth and Sports Affairs, Namal Rajapaksa noted that plans have been devised to attach the National Institute of Sports Science at Torrington Avenue with the Diyagama Sports Complex to establish a globally recognized Sports University.

Minister Namal Rajapaksa added that in order to create a sports culture it is necessary to look for locations young are attracted to play and construct playgrounds accordingly.

Minister further added that during the past month they have focused on tasks such as taking all the major playgrounds under the purview of one institute, maintaining 25 fully accommodated playgrounds, new proposals for the sports ordinance and formulation of a brand new sports act and attracting sponsorships from the private sector to promote sports.

President stated that it was necessary to identify popular sports in remote areas and train sportsmen and sportswomen under training programs immediately.

Member of the Sports Council Kumar Sangakkara highlighted the importance of ranking each sport and training sports-persons targeting international games.

In addition, Mr Sangakkara also shared a suggestion to promote providing marks for sports talents in university entrance to popularize sports as well as to breed national level sports-persons within university network.

It was also discussed during the meeting to make a full scale restructure of Sugathadasa National Sports Complex Authority.

Moreover, mastering sports such as archery and the shooting which have a chance at winning Olympic medals, from the school level were discussed.

Cabinet and State Ministers requested the Sri Lankan sports-persons around the globe to gather under the national flag to bring glory to the motherland.

Minister of Education, Prof. G.L. Peiris, Head of the Presidential Task Force for Economic Revival Mr. Basil Rajapaksa, Secretary to the President, P.B. Jayasundera, Secretaries to the Cabinet and State Ministries, officials of the Line Institutes, representatives from Sports associations and veteran sports personnel were present at the discussion