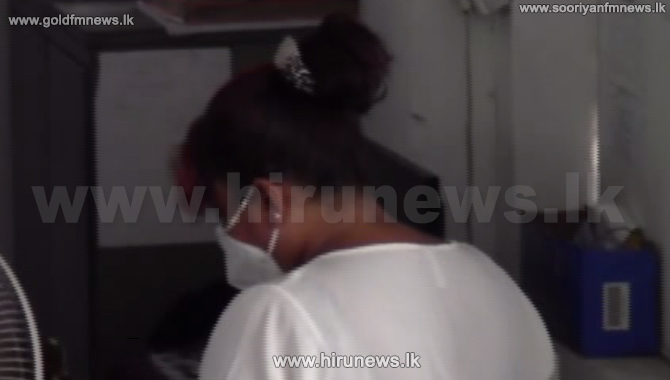 The Court has granted permission today (26) to detain the wife of a known member of an organised crime gang, Ranasinghe Arachchige Sanka Shirantha alias 'Bloemendhal Sanka', Nilmini Priyadarshan and his nephew.

Kelaniya Divisional Crime Investigation Division arrested the woman who is a resident of Pubudugama, Uswetakeiyawa, while she was travelling in a luxury jeep in Grandpass area.
At the time of the arrest, the driver of the vehicle had fled the scene and Bloemendhal Sanka's wife was arrested along with 10 grams of heroin and Rs. 60,000 in cash.
Later, during an interrogation of the suspect, Rs. 2 million earned from drug trafficking was found in the residence of another suspect involved in the heroin racket at the Henamulla apartment complex.
Another suspect from 'Mihijaya Sevena' area in Colombo 15 was arrested based on further investigations conducted, and nearly Rs. 200,000 has been found in the suspect's possession.
He was identified to be a nephew of Bloemendhal Sanka and both the suspects were produced before the Aluthkade Magistrate's Court today (26).
The Police investigations have revealed that around Rs. 20 million was transferred from the accounts of Bloemendhal Sanka's wife.
Meanwhile, two suspects who had rented vehicles and sold them after changing their chassis and engine numbers were arrested based on the information received by the Western Province Southern Crimes Division.
During the interrogation of the suspects who reside in Ruwanwella and Imbulgoda areas, information has come to light that three three-wheelers and a lorry were sold with fake engine and chassis numbers.
The Police Media Spokesperson's Office stated that two suspects were also arrested with two firearms in the Habaraduwa and Yakkalamulla areas.