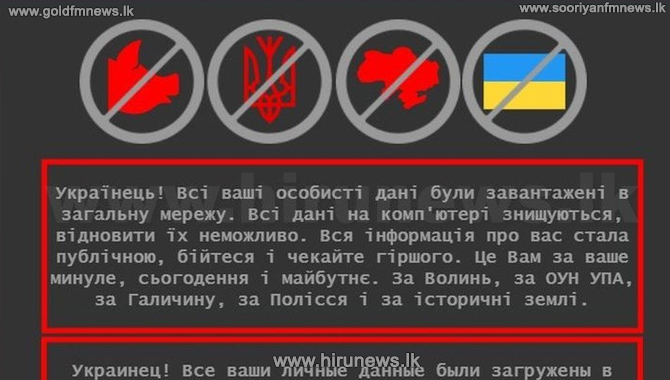 A number of Ukrainian government websites were targeted in a cyberattack, with threatening text warning Ukrainians to "be afraid and wait for the worst" and alleging their personal information has been hacked.

"As a result of a massive cyberattack, the websites of the Ministry of Foreign Affairs and a number of other government agencies are temporarily down," Foreign Ministry spokesman Oleg Nikolenko said on his official Twitter account on Friday.

"Our specialists have already started restoring the work of IT systems, and the cyberpolice has opened an investigation," he added.

The attack appears to be a low-level incident but is symbolic coming at the end of a week of frantic diplomacy involving NATO, the
Organization for Security and Co-operation in Europe (OSCE) and bilateral talks between Russia and the United States -- all aimed at trying to de-escalate tensions on Ukraine's border.

"According to an investigation by the Center for Strategic Communications and Information Security, the first data suggests that the attack was carried out by the Russian Federation," the Ukrainian Information Ministry said in a statement.

"This is not the first time or even the second time that Ukrainian Internet resources have been attacked since the beginning of the Russian military aggression," it added.

Most of the affected state resources have already been restored, according to Ukraine's security service, who said that personal data had not been breached.

Early Friday morning local time, Ukrainian government websites, including that of the Foreign Ministry, displayed dark screens with a threatening text that said Ukrainians' personal information had been hacked.

"Ukrainian! All your personal data has been uploaded to the public network. All data on the computer is destroyed, it is impossible to restore them," the message, published in Ukrainian, Russian and Polish, read.

"All information about you has become public, be afraid and wait for the worst. This is for you for your past, present and future. For Volhynia, for the OUN UIA [Organization of Ukrainian Nationalists Ukrainian Insurgent Army], for Galicia, for Polesie and for historical lands," the web page read.

The UIA and OUN were Ukrainian ultranationalist groups that fought for independence during the Soviet era, while Galicia, Volhynia and Polesie are areas from which they historically drew high levels of support.

A statement from Ukraine's Ministry of Culture and Information Policy suggested that the text mentioned the groups and regions as a "way to conceal the "Russian footprint" by hackers."

"It is obvious that this was done on purpose to cast a shadow over the hacker attack on Poland: Russia and its proxies have been working for a long time to create the quarrel between two friendly neighbouring countries," the ministry added in a statement.