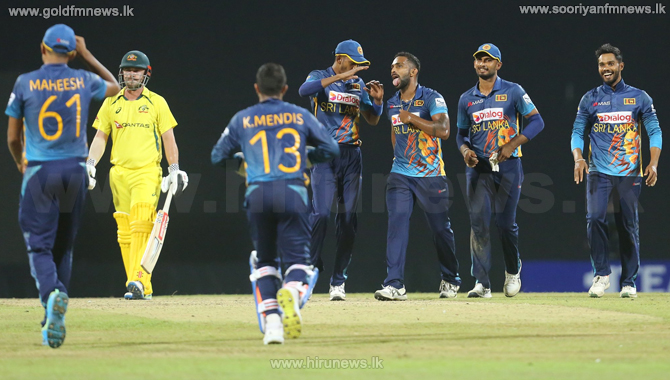 The bowlers ruled all day on a slow Pallekele pitch, but in the end Sri Lanka's bowlers ruled harder. Fast bowler Chamika Karunaratne led an inspired Sri Lankan attack to pull off a thrilling 26-run win over Australia in the rain-hit second one-day international on Thursday.

Chasing a rain-revised target of 216 in 43 overs, Australia suffered from regular wicket falls to get bowled out for 189 in 37.1 overs as Sri Lanka bounced back from their opening loss in the five-match series in Pallekele. Karunaratne returned figures of 3-47 including Steve Smith, for 28, and Glenn Maxwell, for 30, and was ably supported by fellow quick Dushmantha Chameera who got the final batsman.

Dushmantha Chameera took 2 for 19 from his 6.1 overs, deservedly bowling the delivery that won Sri Lanka the match. Chamika Karunaratne was far more expensive, conceding 47 from seven overs, but took three wickets, including the vital one of Glenn Maxwell.

Pat Cummins was probably the best on show, weaponising his slower ball to take 4 for 35 from his 8.4 overs. Maxwell and debutant left-arm spinner Matthew Kuhnemann, took two wickets apiece.

The highest score of the match was David Warner's 37. The highest partnership for either team was the 61-run stand between de Silva and Kusal Mendis for the third wicket. Australia didn't have one stand that got to 40. This is after they'd won the toss and chosen to bowl.

De Silva also scored 34 with the bat and put on 61 runs for the third wicket with Kusal Mendis, who made 36, to guide Sri Lanka to 220 for nine when rain forced play to stop and late end the innings.

Pat Cummins returned figures of 4-35 but his effort went in vain.

Australia lost their openers Aaron Finch, on 14, and David Warner, on 37, to De Silva as the tourists faltered in their tricky chase on a seemingly tough pitch to bat.

Smith and Travis Head attempted to rebuild the innings and put together 31 runs before Karunaratne broke through.

Karunaratne got Smith for 28 and Wellalage's two wickets of Head (23) and Marnus Labuchagne (18) in his two overs put the Aussies in trouble at 132-5.

Maxwell hit back to unsettle the bowlers in his brief stay at the wicket but finally mistimed a shot to get caught at cover off Karunaratne. He made 30 off 25 balls.

Wicketkeeper-batsman Alex Carey was run out for 15 as wheels came off the Australian chase.