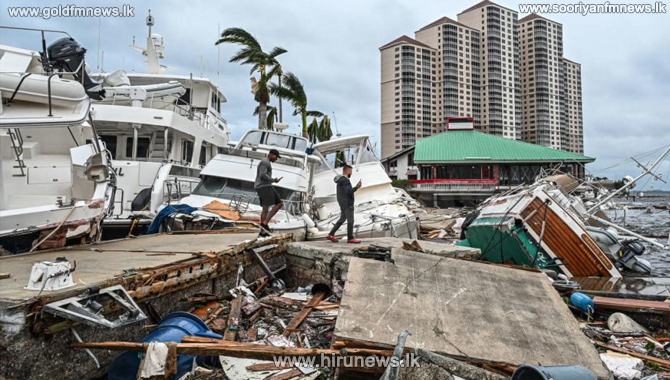 Rescue crews piloted boats and waded through inundated streets Thursday to save thousands of Floridians trapped amid flooded homes and shattered buildings left by Hurricane Ian, which crossed into the Atlantic Ocean and churned toward South Carolina.

Hours after weakening to a tropical storm while crossing the Florida peninsula, Ian regained hurricane strength Thursday evening over the Atlantic. The National Hurricane Center predicted it would hit South Carolina as a Category 1 hurricane Friday, with winds picking up to 80 mph (129 kph) near midnight Thursday.

The devastation inflicted on Florida came into focus a day after Ian struck as a monstrous Category 4 hurricane, one of the strongest storms ever to hit the U.S. It flooded homes on both the state’s coasts, cut off the only road access to a barrier island, destroyed a historic waterfront pier and knocked out electricity to 2.67 million Florida homes and businesses — nearly a quarter of utility customers.

In the Fort Myers area, homes had been ripped from their slabs and deposited among shredded wreckage. Businesses near the beach were completely razed, leaving twisted debris. Broken docks floated at odd angles beside damaged boats and fires smoldered on lots where houses once stood.

“I don’t know how anyone could have survived in there,” William Goodison said amid the wreckage of the mobile home park in Fort Myers Beach where he’d lived for 11 years. Goodison rode out the storm at his son’s house inland.

The hurricane tore through the park of about 60 homes, many of them destroyed or mangled beyond repair, including Goodison’s single-wide home. Wading through waist-deep water, Goodison and his son wheeled two trash cans containing what little he could salvage — a portable air conditioner, some tools and a baseball bat.

The road into Fort Myers was littered with broken trees, boat trailers and other debris. Cars were left abandoned in the road, having stalled when the storm surge flooded their engines.

Florida Gov. Ron DeSantis said at least 700 rescues, mostly by air, have been conducted so far and involving the U.S. Coast Guard, the National Guard and urban search-and-rescue teams.

After leaving Florida as a tropical storm Thursday and entering the Atlantic Ocean north of Cape Canaveral, Ian spun up into a hurricane again with winds of 75 mph (120 kph).

A hurricane warning was issued for the South Carolina coast and extended to Cape Fear on the southeastern coast of North Carolina. With tropical-storm force winds reaching about 415 miles (665 kilometers) from its center, Ian was forecast to shove storm surge of 5 feet (1.5 meters) into coastal areas in Georgia and the Carolinas. Rainfall of up to 8 inches (20 centimeters) threatened flooding from South Carolina to Virginia.

National Guard troops were being positioned in South Carolina to help with the aftermath, including any water rescues. On Thursday afternoon, a steady stream of vehicles left Charleston, a 350-year-old city.

Sheriffs in southwest Florida said 911 centers were inundated by thousands of stranded callers, some with life-threatening emergencies. The U.S. Coast Guard began rescue efforts hours before daybreak on barrier islands near where Ian struck, DeSantis said. More than 800 federal urban search-and-rescuers were also in the area.