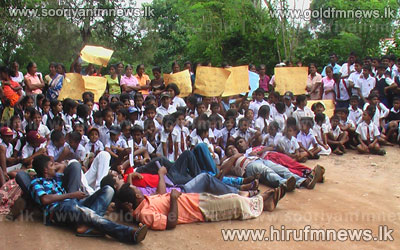 Based on various motives, protests were observed before several schools in the island today by parents of students.

Parents of children receiving education at the Bandaranaike National College at the Warapitiya Junction on the Kandy-Mahiyangana main route engaged in a protest this morning, objecting moves by authorities to re-locate the school's primary section.

Parents charge that the security of their children are being jeopardised by the proposed move.

According to our correspondent the protest had caused vehicular congestion on the Kandy-Mahiyangana route.

Several indignant parents expressed the following views to the media.

Meanwhile parents of students receiving education at the Koswaadiya-Saraswathie College in Chilaw engaged in yet another protest, expressing their dissent to a decision to limit curricular activities at school, until grade five.

Parents expressed the following views to our news team in this regard.

Moreover another protest was launched against the Principal of the Weligama Muslim National College.

A father representing the parents taking part in the protest expressed the following views to our news team.