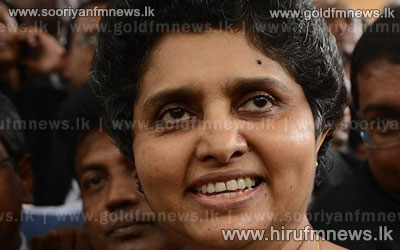 The Impeachment motion filed against Chief justice Dr. Shirani Bandaranaike has led to a ramification of ideologies between parties representing the opposition.

The government is of a single stance while parties constituting the opposition remain polarised over the parliament & judiciary.

While the JVP & Tamil National Alliance decided to appear before court the United National Party withdrew from the proposition.

While attorney-at-law Srinath Perera stated that he would take to the streets if the impeachment report was taken up for debate in parliament, senior lecturer Nemsiri Jayathilleke stated that all matters pertaining to the impeachment had transpired within a constitutional frame work.

Meanwhile parties which charge that the Chief Justice should step down also remain ramified due to qualms over the government's next course of action in this regard.

The People's Movement for Justice which organised a protest in Colombo-Fort today charged that the Chief Justice should step down nevertheless.

Chairman of the Patriotic National Movement Gunadasa Amarasekara meanwhile charged that a Supreme Court Judge should be appointed to the post made vacant by the resignation of the current Chief Justice.

In the interim an invitation extended to Chief Justice Dr. Shirani Bandaranaike to join active politics has come under heavy criticism by various parties.

Minister Keheliya Rambukwella as well as Minister Wimal Weerawansa made the following observations regarding the invitation which was extended to the Chief Justice by Leader of the Democratic National Alliance Sarath Fonseka.

Meanwhile Leader of the Democratic National Alliannce Sarath Fonseka filed a response to these allegations in the following manner.