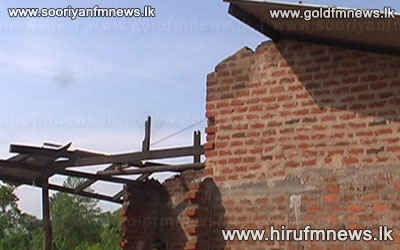 Around 100 housing units have been damaged due to strong gale winds which blew through Haldemulla-Badulla & Haputhale this evening.

According to the Centre for Disaster Management the winds had been generated concurrent to heavy showers which were experienced in the respective areas.

Deputy Media Director of the Centre for Disaster Management expressed further views regarding the extent of the damage to our news team in the following manner.

Moreover according to the DMC several main reservoirs in the North Central province are said to be spilling over due to the incessant rains being experienced.

Still in related developments the Department of Meteorology has extended its warning issued to Naval and fishing communities in which it requests them to refrain from engaging in any & all maritime activities in the maritime stretch off the coast from Matara to Potuvil due to the development of a low pressure condition in the Bay of Bengal.

Heavy rainfall exceeding 100mm's has also been predicted for certain areas in the Eastern, Central, Uva and Southern provinces which also includes the Polonnaruwa District.

Duty Meteorologist at the Met. Department Pabodhani Karunapala expressed the following views to our news team in this regard.