Expired potatoes discovered from Dambulla make their way to eateries 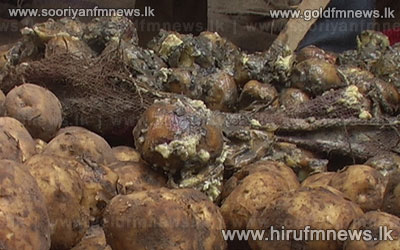 Steps have been taken to seal 3 eateries in Dambulla which had produced food items utilising potatoes which were deemed unsuitable for consumption.

Public Health Officers attached to the Dambulla Municipal Council had carried out the raids based on a tip off, while information has come to light concerning 10 more eateries, which would be investigated into based on the instructions dispensed to authorities by the mayor of Dambulla.

Proprietors found guilty of the crime had stated that a vendor who had arrived in a trishaw had sold the stock of potatoes at 25 rupees a kilogramme.

A container loaded with a consignment of potatoes unsuitable for consumption was seized at the Dambulla Economic Centre on the night of the 31st of December.

The consignment which was valued at 1.8 million rupees had been flown in from Pakistan.

Subsequently the stock of potatoes was ordered to be buried by authorities.

In a related development the Consumer Services Authority discovered 44 thousand 700 kilogram's of expired Bombay onions on the 29th of December, while at a storage complex owned by Laksathosa in Kurunegala-Gattuwana.