Favourable if the Appeals Court did not issue notice - says UNP 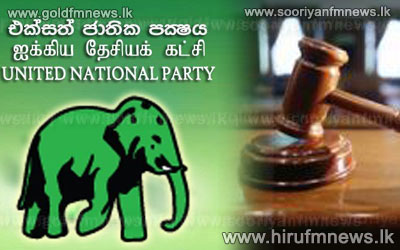 The United National Party has issued another release with concern to the impeachment motion filed against the Chief Justice.

The release goes onto note that according to clause 107 of the constitution filing an impeachment against an existing Chief Justice is a process endemic to parliament.

It also notes that according to the Latimore House Declaration the process should be enacted in an independent & unbiased manner.

The release issued by the UNP goes on to point out that the Supreme Court has not recognized standing order 78(a), under clause number 107 of the constitution under which the Attorney General Has stated that the existing provisions within the constitution are sufficient to carry out such an investigation.

The release also states that several media institutions had gone to the lengths of publishing unverified facts regarding the UNP's absence in court with regards to the court case in this regard.

Accordingly the release notes that according to clause 49 of the Judicial Act if a Supreme Court magistrate is found to be a respondent of a particular court case or a stakeholder, only the Supreme Court or its Magistrates are permitted by law to adjudicate such a matter.

Hence in conclusion the release states that the Appeals Court should have refrained from issuing notice.