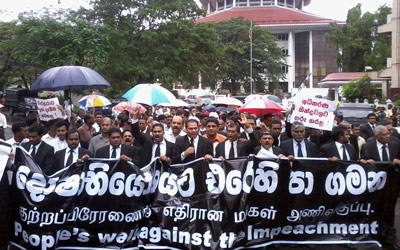 The parliamentary debate regarding the impeachment report is scheduled to begin today.

Two lawyers associations are conducting two protests against this debate.

A tense situation arose this morning at the Hultsdorf court complex when lawyers and representatives of a number of political parties began a peaceful procession from the court complex to parliament.

The situation arose when another group conducted a protest in front of the procession blocking their way.

Leader of the New Leftist Front Doctor Wickramabahu Karunarathne spoke to our news team and gave the following explanation.

Colombo urban councillor Mahinda Kahandagamage was amongst the group that was supporting the impeachment and he spoke to our news team and expressed these views.

The lawyers who had gathered for the protest march stated that they would reach Parliament despite all obstacles.

Attorney at Law Sunil Watagala had the following to say in this regard.

The procession reached the Lotus Roundabout where it was temporarily concluded a short while ago.

However, the parliamentary debate regarding the impeachment report is scheduled to begin this afternoon and security has been tightened along the access road to the parliament.