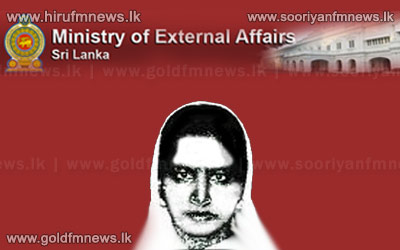 Rizana Nafeek’s remains have been buried in Saudi Arabia after being executed in the country.

The foreign affairs ministry has confirmed this after the Sri Lankan embassy in Saudi Arabia informed of it.

Nafeek had been working in Saudi Arabia for two weeks in 2005 when the Utaibi family’s 4-month-old baby died in her care.

Nafeek had no access to legal counsel until after a court in Dawadmi sentenced her to death by beheading in 2007.

Requests from the President and Human Rights organizations to halt the process fell on deaf ears as she was executed on Tuesday.

Meanwhile a protest was organised before the Fort Railway station this morning hurling accusations at the government stating that it had failed in its obligations to secure the release of Rizana Nafeek.

Chairwoman of the Women's Movement for Freedom, Dimuthu Attigala who took part in the protest expressed the following views to our news team.

However it is reported that a group of representatives from the Bureau of Foreign Employment including its Chairman Amal Senandhilankara, had visited the Muttur area in Trincomalee which is the home town of the late Rizana Nafeek.

Chairman of the Bureau of foreign Employment Amal Senadhilankara speaking to our news team expressed the following views in this regard.

Meanwhile, the European Union expressed dismay that Saudi Arabia had beheaded a Sri Lankan maid convicted of murdering her employer's baby, despite repeated appeals for a stay of execution.

EU foreign affairs head Catherine Ashton said in a statement that she was deeply dismayed by the information that Sri Lankan national Rizana Nafeek was executed.

Human rights groups said Nafeek was 17 at the time of the offence and that Saudi Arabia was one of just three countries in the world to impose the death penalty for crimes committed as a minor.