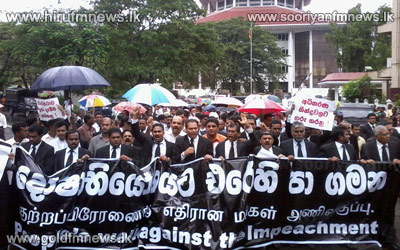 Legal Proceedings at several courts were disrupted while some continued devoid of interference as several attorneys refrained from their duties in objection to the parliamentary debate on the impeachment.

Our Correspondent in Kandy stated that court proceedings took place without disruption except for the Kandy High Court.

Meanwhile, proceedings in Ratnapura took place as usual except for the Ratnapura Magistrate court.

Not many disruptions were caused to court proceedings in Badulla and Gampaha.