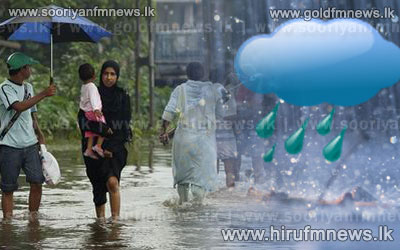 As a result of the North-East monsoon becoming more active rain could be expected in several areas in the island  today as well.

Meteorologist in charge Jeevan Karunaratne said that the windy condition in the North - East, East and South sea belt areas could become severe.

The Disaster Management Centre says that many sluice gates of the islands main reservoirs are open, the low - lying areas around them have been sumerged.

Disaster Management Centre Deputy Media Director  Sarath Laal said that as a result of sluice gates being opened the areas around reservoirs such as Victoria, Randenigala, Upper Kotmale, Parakrama Samudraya, Maaduru Oya and the Mahaveli River have  been inundated.