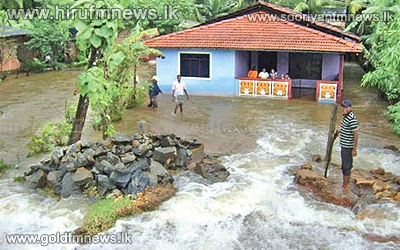 The Centre for Disaster Management states that 150 families belonging to 8 grama seva divisions in Hali Ela-Atampitiya, have been placed under duress due to the overflow of the Badulu Oya, which has been influenced by adverse weather.

Moreover a resident of Gila-nanda-Badulla yesterday was pronounced dead upon having been swept away by water currents.

Several low lying areas have been inundated due to the over flow of reservoirs.

It is also reported that several grama seva divisions in the Mannar area have been submerged in water.

Deputy Director of the CDM Pradeep Kodippli speaking to our news team expressed the following views in this regard.

Meanwhile the Director of the Water Management Unit of the Department of Irrigation Janaki Meegasthanne when contacted by our news team stated that the sluice gates of 21 out of the 71 reservoirs coming under the purview of her department had been released.

Railway activity on the upcountry track in the interim has been limited to Bandarawela.

According to the Superintendent of Railway Transport L.A.R. Rathnayeke earth slips have been attributed to the limited steering.

As a result of the North-East monsoon becoming more active rain could be expected in several areas in the island  today as well.

Meteorologist in charge Meril Mendis said that the windy condition in the North - East, East and South sea belt areas could become severe.