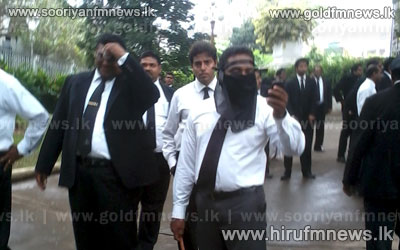 The parliamentary debate on the impeachment of the Chief Justice is due to be taken up in parliament for a second occasion this afternoon.

Several protests were observed by attorneys in various parts of the island against the impeachment motion due to which court activities are believed to have been hampered.

Accordingly cases scheduled for today at the Colombo Magistrate & High court complexes were postponed for later days based upon the decision of judges.

Meanwhile attorneys attached to the Colombo Supreme Court engaged in a black band protest against the impeachment of Chief Justice Dr. Shirani Bandaranaike.

Senior attorney Ranjan Silva speaking to our news team noted that the protest was observed peacefully.

However attorneys attached to the Tangalle, Ambilipitiya, Rathnapura & Nugegoda Magistrate & District courts added that routine activities scheduled for today at these courts were carried out devoid of any hindrance.