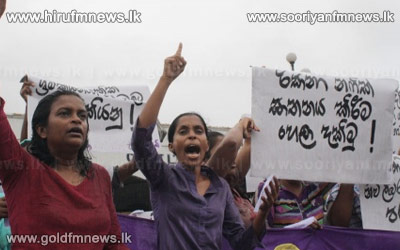 Attention still continues to surround the execution of Rizana Nafeek, the Sri Lankan housemaid who was beheaded in Saudi Arabia.

Several demonstrations as well as prayer services were organised during the course of the day throughout the island denouncing the act.

A special prayer service was organised at the Muttur Mosque in honour of late Rizana today.

Incidentally Muttur was the home town of Rizana.

According to the Imam of the Muttur Mosque M.M. Kareem, Rizana had been executed based on the Sharia law.

Meanwhile yet another protest was observed before the Lipton Circus in Colombo today which was organised by the Movement for the Protection of Women's Rights.

Chairwoman of the movement Attorney-at-Law Sumana Benaragama expressing her views to our news team stated that if the government had intervened, a stay on the execution of Rizana could have been obtained.

In related developments Britain has been quick to condemn the execution of Rizana Nafeek stating that act was "cruel and inhuman".

In a statement issued in London, Foreign Office minister for the Middle East Alistair Burt said that he condemns the execution of Rizana Nafeek, despite the appeals for her sentence to be commuted.

Meanwhile the death sentence was also condemned by Human Rights Watch as a breach of international codes governing the rights of minors.