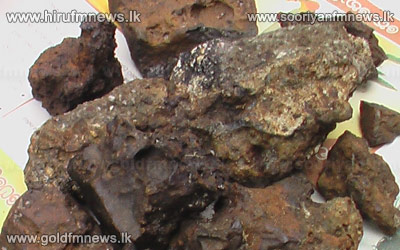 Peradeniya University Geology Division says that it rejects the view that the rock fragments recently found at Aralaganwila in Polonnaruwa are meteors.

Peradeniya University Geology Division Professor Rohana Chandrajith said that this was a result of a change that had taken place due to a lightning falling on the ground.

However a contrary view is expressed in an announcement the Colombo MRI has released.

In the MRI release said that the rock fragments concerned contained fossilised live parts of species Algae of genus Diatama.

The MRI announcement said further it had been revealed from experiments carried out with regard to rock fragments found in Aralagangwila there was the first clear evidence to indicate that life existed outside the earth.

Meanwhile in further experiments British Buckingham University Astro-bio-Scientist Professor Chandraa Wickremesinghe carried out on the rock fragments concerned, it had been further confirmed that these were meteors.

The professor pointed out that as a result of this the first clear evidence had been disclosed indicating that life exists outside the earth.