Do not make the judiciary an esplanade for tomfoolery says President; Bar Association meets President 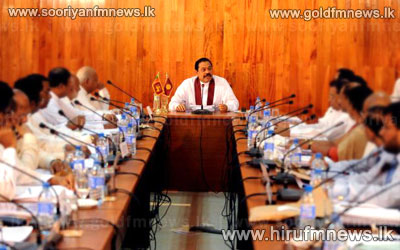 A special meeting between President Mahinda Rajapaksa and representatives of the Bar Association was held today at Temple Trees.

The president had exchanged views with a large number of representatives of the Bar Association including its Chairman United National Party Parliamentarian Wijedasa Rajapaksa.

Speaking here President Rajapaksa had stated that he would not let the country be dragged back to an era where it was being ruled by a leaflet.

President Rajapaksa had also noted that it was the duty of patriots to identify groups which aimed at gaining petty political gains by setting off the countries judiciary against various culpable elements.

Moreover representatives of the Bar Association had noted that unscrupulous parties were drawing attempts at gaining political leverage at the cost of the bar association.

Members of the Bar Association had categorically denied any affiliations with such parties.

President Mahinda Rajapakse speaking further requested not to make the judiciary an esplanade for tomfoolery.