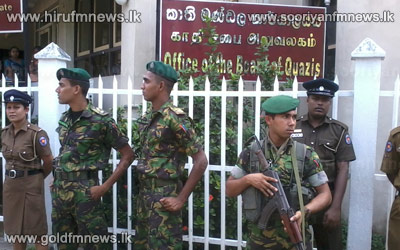 A case that was scheduled to be heard in the Supreme Court Room 502 under the patronage of Dr. Shirani Bandaranayaka was moved to court room 403 subsequent to her absence in court.

The case in question was scheduled to be heard in the morning and the 3 member panel of judges consisted of Supreme Court Judges S. I. Imam and P. A. Rathnayaka in addition to Dr. Shirani Bandaranayaka.

Meanwhile, the Center for Policy Alternatives has filed a fundamental rights petition in the Supreme Court to prevent former attorney general Mohan Peiris from being sworn in as the new chief justice.

The petition states that no valid vacancy for the post of Chief Justice exists and the petitioners are requesting the Supreme Court to issue stay order to prevent Mohan Peiris from taking over duties or acting in that capacity.

Security has been tightened around the Supreme Court complex since this morning.

Meanwhile, a tense situation had arisen between several lawyers and policemen who were stationed at the Supreme Court when the lawyers attempted to hold a press conference on the road in front of the court complex.

UNP Western Provincial Councillor Srinath Perera and JVP Colombo Urban Councillor Sunil Watagala who arrived there stated that a press conference was scheduled to be held.

The US State Department says the removal of Chief Justice could impact on Sri Lanka’s ability to attract foreign investment.

Speaking to reporters at the daily State Department press briefing yesterday State Department spokeswoman Victoria Nuland reiterated that in order to safeguard democracy, sovereignty of the Judiciary must be protected.

Meanwhile, the Anti Imperialistic People's movement states that the impeachment activities have allowed imperialists to intervene in Sri Lanka.

The convenor of the Anti Imperialistic People's movement Venerable Dambara Amila Thero made this statement while speaking at a press conference held in Colombo.

Well wishers of Mohan Peiris who is scheduled to be sworn in as Chief Justice gathered in front of the Hultsdorf court complex today.

The chairman of the Self Employees Association Mahinda Kahandagama made the following statement.