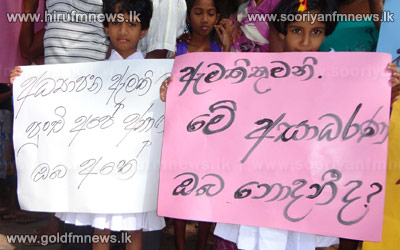 The National Day for grade one admissions is marked today.

The national ceremony in this regard was held at the Trincomalee Vidyaloka College under the patronage of Minister of Education Bandula Gunawardhana.

Nearly 335 thousand students are being enrolled into the 1st grade this year.

However it is being reported that grade one admissions were rejected at a school in Bingiriya today despite the significance of the day.

Officials at the Bimgiriya Sri Saranankara College had informed authorities that they were unable to accept admissions since the school had been chosen for secondary school programme.

Earlier it was reported that the minister of education had cancelled the secondary school programme at the college.

Parents enraged at the policy shift, staged a protest before the school this morning.

Palitha Rangebandra who presided over a function to declare open a newly constructed school building in the Thuduwawa area in Chilaw noted that even first graders were left with no choice but to protest against the incompetence of officials.

Moreover Minister of Education who was the Chief Guest during the National ceremony marking the admission of first graders asserted that all parties should act with commitment to secure the future of first graders.