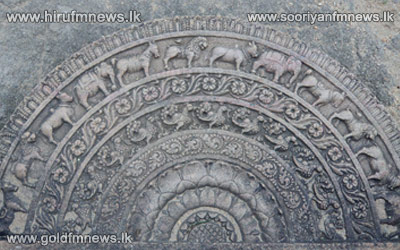 According to the London Daily Mail the item which is a Sri Lankan antique which holds great archaeological significance was taken from Sri Lanka by a British planter during the islands British rule during the 1950’s.

It has also been revealed that the moonstone is around 1300 years old.

The moon stone had been placed at the back door of a residence which is situated in the county of Sussex.

The weight of the moon stone is said to be around one ton with a width of around 6 inches.

Subsequent to the death of the planter, his daughter had owned his property and had paid little attention to the moonstone unaware of its archaeological significance.

The moon stone is said to fetch around 30,000 pounds during its planned auction.

When inquired from Director General of Archaeology Professor Senarath Dissanayeke it was noted that even under international law Sri Lanka was unable to reclaim the artefact.

But however he noted that Sri Lanka was able to purchase the item during its auction.