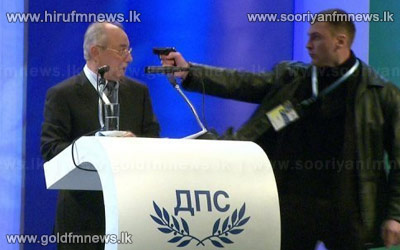 Bulgaria's veteran Turkish minority party leader Ahmed Dogan resigned as expected, but not before he foiled a dramatic attack by a man armed with a gas pistol at his party's national conference in Sofia.

Dogan was addressing delegates of his Movement for Rights and Freedoms party when a tall man in black leapt onto the stage, rushed to his podium and pointed the non-lethal weapon at his head.

Visibly stunned, Dogan flung the attacker's arm away before a shot could be fired.

Both men fell to the ground in the ensuing scuffle.