2 letters signed by the Kelaniya Divisional Councillors and Buddhist Monks to President. 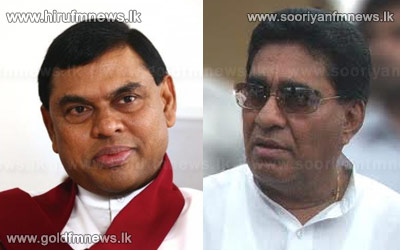 Two letters signed by the Kelaniya Divisional Councillors and Buddhist Monks requesting that Economic Development Minister Basil Rajapaksa be appointed to the vacant post of SLFP organiser of the Kelaniya electorate have been addressed to the President.

Chief Incumbents of 37 out of the 41 Buddhist  temples in the Kelaniya electorate have signed the letter the Buddhist monks have submitted to the President.

UPFA Kelaniya Divisional Councillor Hasitha Madawala was shot dead in front of his house situated at Waraagoda in the night of the 5th of this month.

Five persons including two of coordinating secretaries of Minister Mervyn Silva were arrested by police and remanded in connection with the incident.

Subsequently while Minister Mervyn Silva resigned from the post of organiser of the electorate, the President too accepted the resignation.

However after the incident while Minister Mervyn Silva met the people of Kelaniya day before yesterday he stated as follows.