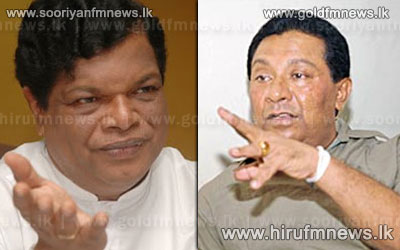 Minister of higher education S. B. Dissanayaka and Minister of education Bandula Gunawardena held a joint press conference today to describe the new technical subject stream that will be introduced to the Advanced level curriculum in 2013 increasing the number of subject streams to 5.

Minister of education made the following statement in this regard

Speaking at the press conference Minister of Higher Education S. B. Dissanayaka stated that the necessary courses are currently being formulated in the universities.

Meanwhile, speaking at a press conference convened by the Lanka Teachers Association, its secretary Joseph Stalin claimed that the statements made by the minister of education with regard to the Z score are in contempt of court.

Speaking at a function held in Devi Balika Vidyalaya Minister Bandula Gunawardena made the following statement with regard to the Z score issue.

Joseph Stalin made the following remark with regard to the comments made by Minister Gunawardena.

Upon inquiry by a journalist as to why the minister kept silent during the Z score issue, Minister of education Bandula Gunawardena made the following statement.

Meanwhile, the engineering faculty and the National Institute of Technology are still closed following the clash between two groups of students from the two faculties.

Vice Chancellor of the Moratuwa University Professor A. K. W. Jayawardena stated that no definitive date can be given as to when the faculties will be opened.

He further stated that until the security of the university students can be confirmed the two faculties will remain closed.

A special investigation has been launched by the university authorities as well and it is reported that the two faculties might be closed till the investigations are concluded.

3 university students and one other individual have been arrested in connection with the clash and they are currently in remand custody.

Minister of Higher Education S. B. Dissanayaka made the following statement alleging the involvement of Frontliners in the clash.

However, the convenor of the inter university student federation Sanjeewa Bandara stated that this was an attempt to stop the students who are struggling on behalf of free education.

However, Minister of Higher Education S. B. Dissanayaka states that the students involved in the clash will be expelled following a proper investigation.

The minister also made the following statement regarding the IUSF while taking part in a leadership training program held at the Diyatalawa Army Camp.