Many lawyers to take part in the ceremony to welcome the new Chief Justice. 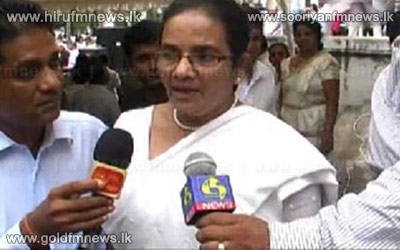 Former chairwoman of the Bar Association of Sri Lanka Anoma Gunathillaka states that a majority of the lawyers in the country will take part in the function tomorrow to welcome the new Chief Justice Mohan Peiris.

The BASL passed a proposal regarding this following a special summit convened on the 15th of December last year.

UNP MP and Chairman of the BASL Wijedasa Rajapakse made the following statement during a press conference held on the same day regarding the decision taken at the summit.

However, a tense situation arose at the summit regarding the passing of the proposal.

Certain attorneys at law stated that the proposal was not passed unanimously and the following is the tense situation that arose during the summit.

Deputy Chairwoman of the BASL Anoma Gunathillaka resigned her position following the passing of the proposal.

Although there are in excess of 14 thousand lawyers in Sri Lanka, approximately 3000 took part in the summit.

Senior Attorney at Law Prathiba Mahanamahewa stated that the address made by the chairman of the BASL at the function held following the appointing of a new Chief Justice is only a tradition.

He also stated that no such function was held following the appointment of former Chief Justice Dr. Shirani Bandaranayaka